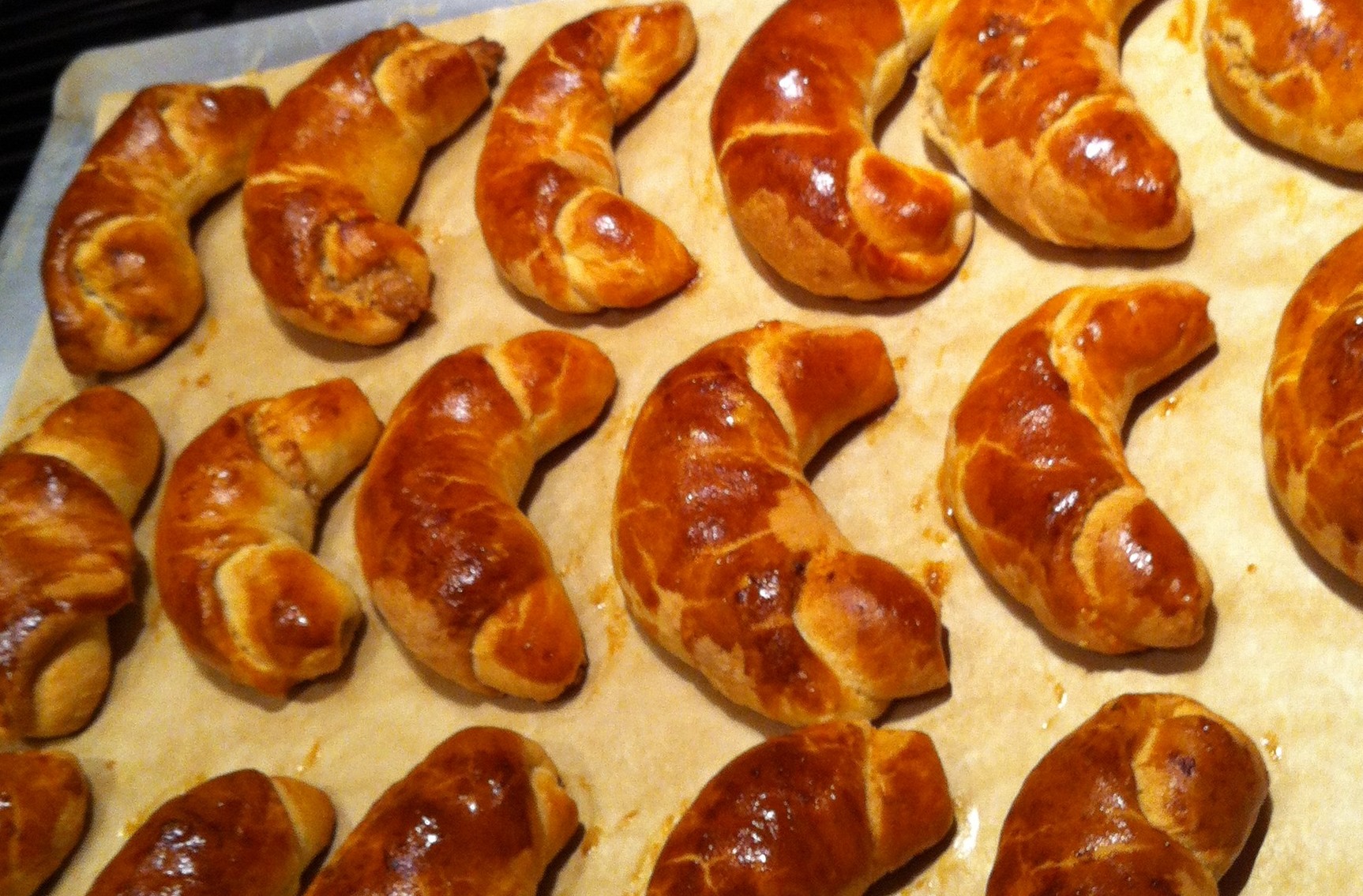 No doubt about it – this is my signature pastry.  I baked it sooooo… many times both for festive and everyday occasions, so by now I am quite fast when forming the little crescents.  It is a traditional sweet pastry in many European nations made with a light yeasted dough and ground walnuts or ground poppy seeds as rich filling.  I like how they are not uniform in size – at least not in the way how I make them – and also how some might have a little bit more filling than the others.  It is a little bit like a lottery – which piece will have the most filling?

There are many different variations of this recipe.  After experimenting with several, the one I’ve been using for decades is a version from the Hungarian cookbook “99 sütemény és torta 33 színes ételfotóval” (99 cookies and cakes with 33 color photos) by Mari Lajos.  You can visit her webpage Lajos Mari konyhája written in Hungarian, and even though you probably don’t speak this language, you might still get a peek into her kitchen based on the photos.

There is an interesting history/legend in the name Pozsonyi kifli.  Pozsony is the Hungarian name for Bratislava, the capital of Slovakia.  When it was the capital of the Austro-Hungarian Empire, also called Pressburg in German, a lot of Austrian and German bakers came to the city, where people spoke three languages.  They brought with them the recipe for a traditional, walnut or poppy seed-filled Christmas pastry, the bejgli (Beugel in German).  The small version of this pastry became Pozsonyi kifli.  Just for the record – in these days in case you want to order Pozsonyi kifli in a Slovak or Austrian restaurant, the name of this pastry in Slovak is Bratislavský rožok, in German Pressburger Kipfel.  After the defeat of the Ottomans/Turks who unsuccessfully tried to invade Vienna in the year of 1683, a master baker Wendler came up with a half-moon shape cookie and the name Gipfel for it (meaning top of a church tower).  The shape resembles the crescent, which the Turks had on their flag placed on the top of a church outside of the walls of Vienna.  One of the bakers coming to Pozsony was a descendant of Wendler, bringing with him the name for the pastry.  Legend says, Pozsonyi kifli was already being baked in the city in 1780, although the local newspaper only mentioned it for the first time in 1876.  At the turn of the 19th and 20th century, it was Gustáv Wendler, one of the famous bakers of Pozsony, who made the best Pozsonyi kifli, and even via post-mail sent his pastry to the world.

Warm up the milk.  In a small bowl, dissolve 2 teaspoons of sugar with the yeast in 50 ml milk. Place the flour into a large bowl and cut the butter into it.  Add 30 grams of sugar, a pinch of salt, the cinnamon and lemon zest.  Use a pastry blender (or your Kitchen Aid with the hook attachment) to break up the butter until the mixture resembles coarse meal.  First add the milk-yeast mixture, then the remaining milk.  Knead until no longer sticky.  Gather into a ball, but leave it in the bowl and cover with a clean kitchen towel.  Let it rise at room temperature for 30 minutes.

In the meantime, prepare the filling.  If you want to use both kinds, use only half of the required amount of the listed ingredients.  Boil the milk.  In a bowl, add sugar to the ground walnut (or poppy seeds) together with the other appropriate ingredients, and pour the milk over the top.  Mix well and let it cool.

Dust a big cutting board or your work surface with a little flour.  From the dough, gather small balls the size off a small egg, and with a rolling pin roll them into 2-3 mm thick ovals (about 4 inch long, 3 inch wide).  Spread about 1 teaspoon of filling into each oval (avoid the edges, but you don’t really need to spread the filling evenly).  Roll dough into cylinder and form into crescent shape.  Pinch the ends closed and place the crescents on the cookie sheets with seam on the bottom.

Preheat the oven to 200 °C (400 °F).  Brush the tops of the cookies again with the egg wash – it will result in a beautiful golden color after baking.  Bake for 30-35 minutes.  Cool on the cookie sheets or on a cooling rack.  Makes about 30-35 pieces, depending on the size of the crescents.

Leave a Reply to Kathleen Cancel