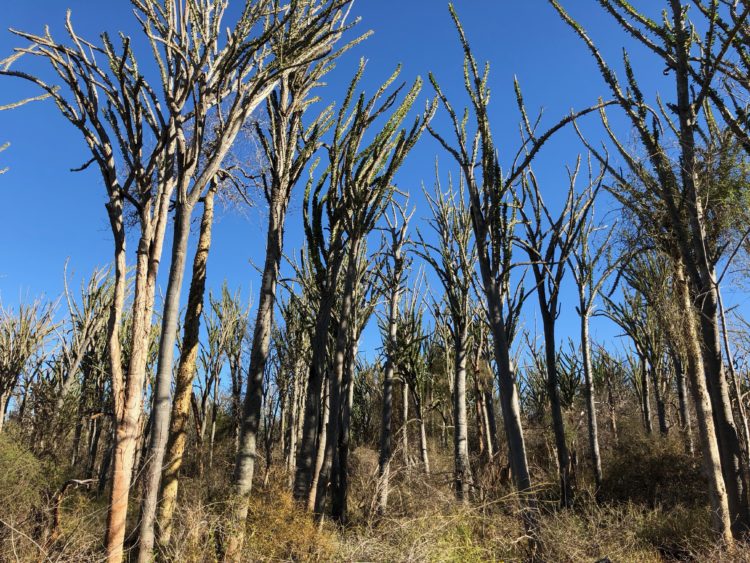 Okay, I have a confession to make.  Even though I am a trained wildlife biologist, my actual (first) degree reads; “Bachelor of Science in Forest Resources.”  It mostly reflects the fact that I obtained my degree through the College of Forest Resources at the University of Washington, not that I was planning on becoming a professional forester!

But it also means that in addition to the fortunate appreciation of nature instilled in me by my parents, I also have a science-based understanding of how these marvelous ecosystems work and the role they play in the world.  Imagine my great surprise then, when, in addition to the well-studied and prepared for encounter with the wildlife of Madagascar, I was also almost left speechless (painfully so at times as I will explain) when I first beheld the remnant forests of the country.

As with the mind-boggling array of endemic fauna (mammals, birds, insects, amphibians) on Madagascar, the number and variety of flora is also breathtaking.  In addition to individual plants, many ecosystems are also wholly unique to Madagascar.  Included in this list are the many forests encountered.  There are dry deciduous, sub-humid, succulent woodlands, humid lowland (rainforest), and spiny forests.  The majority of our explorations were spent in the latter two types. 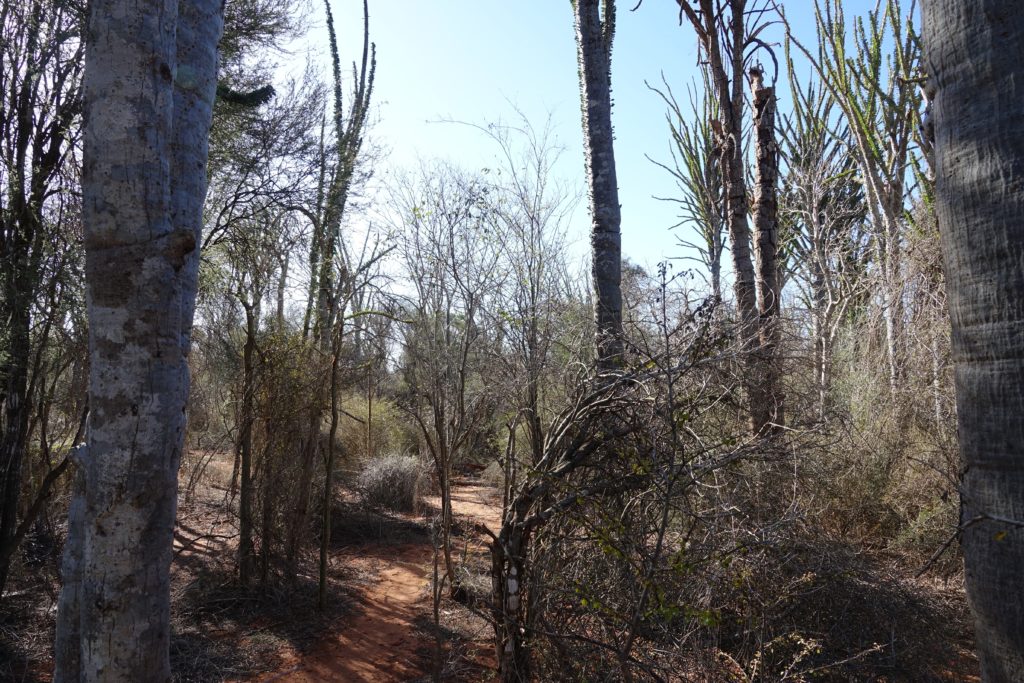 Berenty Reserve in the extreme southeast of the country is an excellent place to experience the truly unique (95% endemics) spiny forest.  It is perhaps more accurately described as a spiny thicket or woodland as the “trees” are mostly in the 3-6 meter range, with a few reaching 10.  You find baobabs (6 of the 9 species in the world occur on Madagascar), the octopus or compass tree (the leading branches point south), and the sunburn tree.  It is associated with poor soils, and low, unpredictable winter rainfall.  It is somewhat reminiscent of the cactus “forests” of the American southwest as most have also evolved small leaves and spines to more efficiently retain moisture.  A major difference is that that the spiny forest is woody rather than succulent as are cacti. 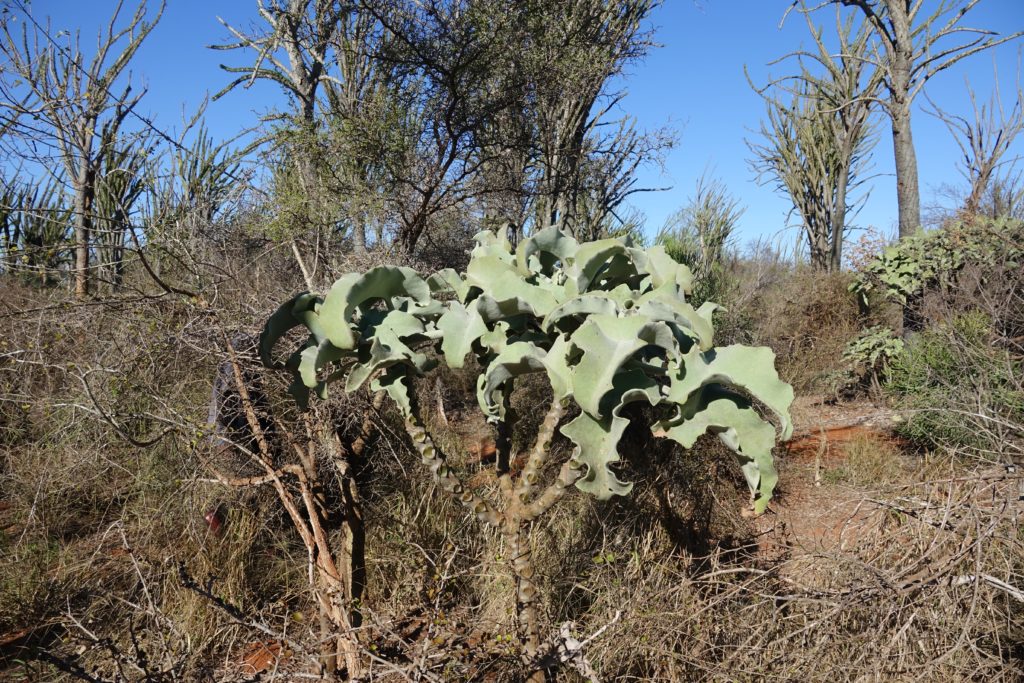 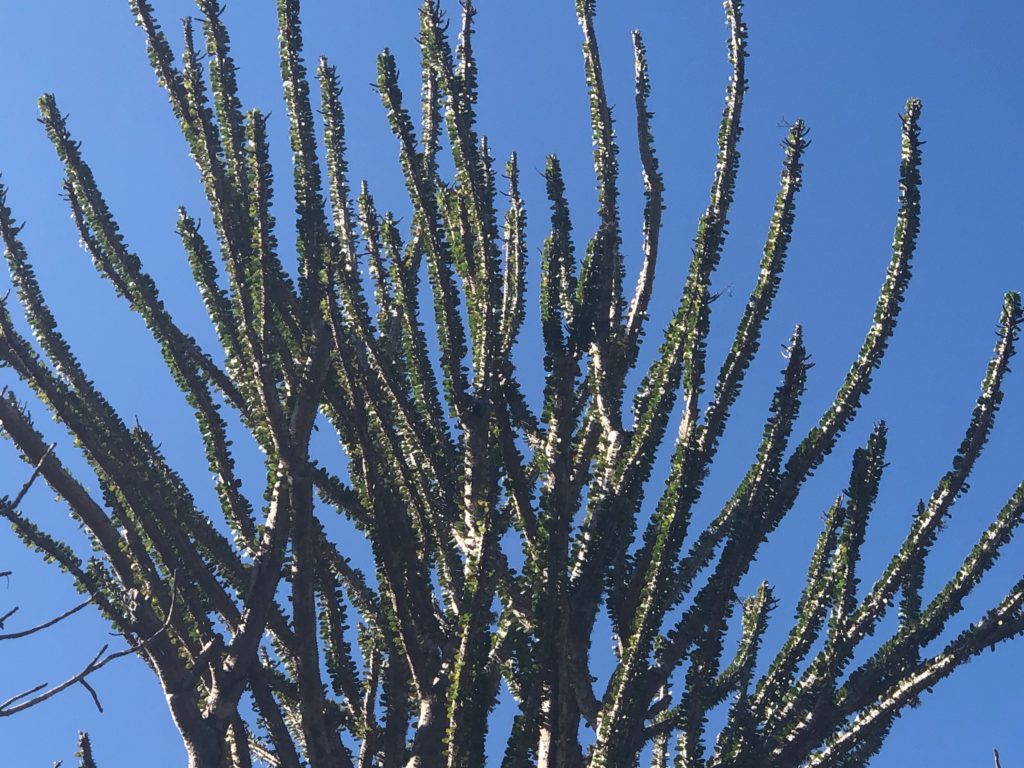 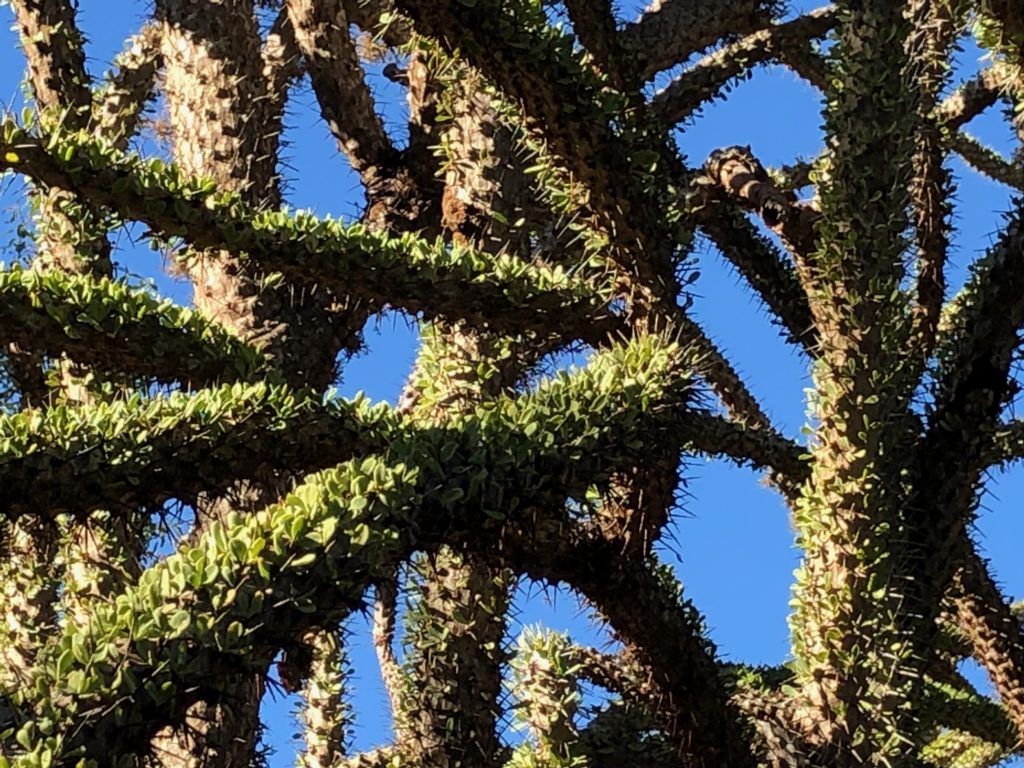 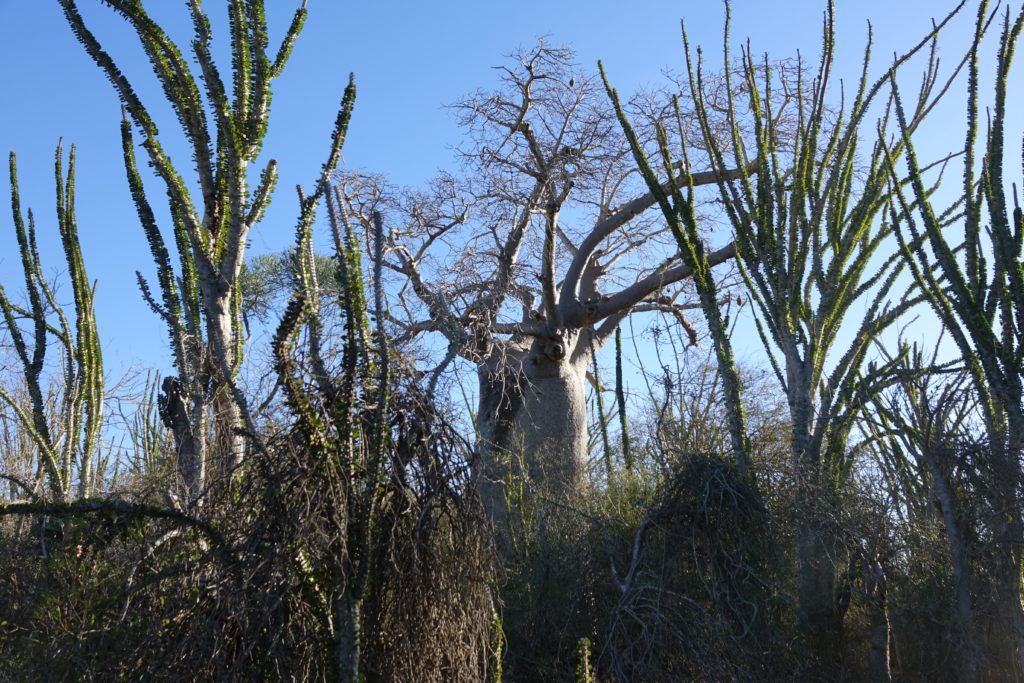 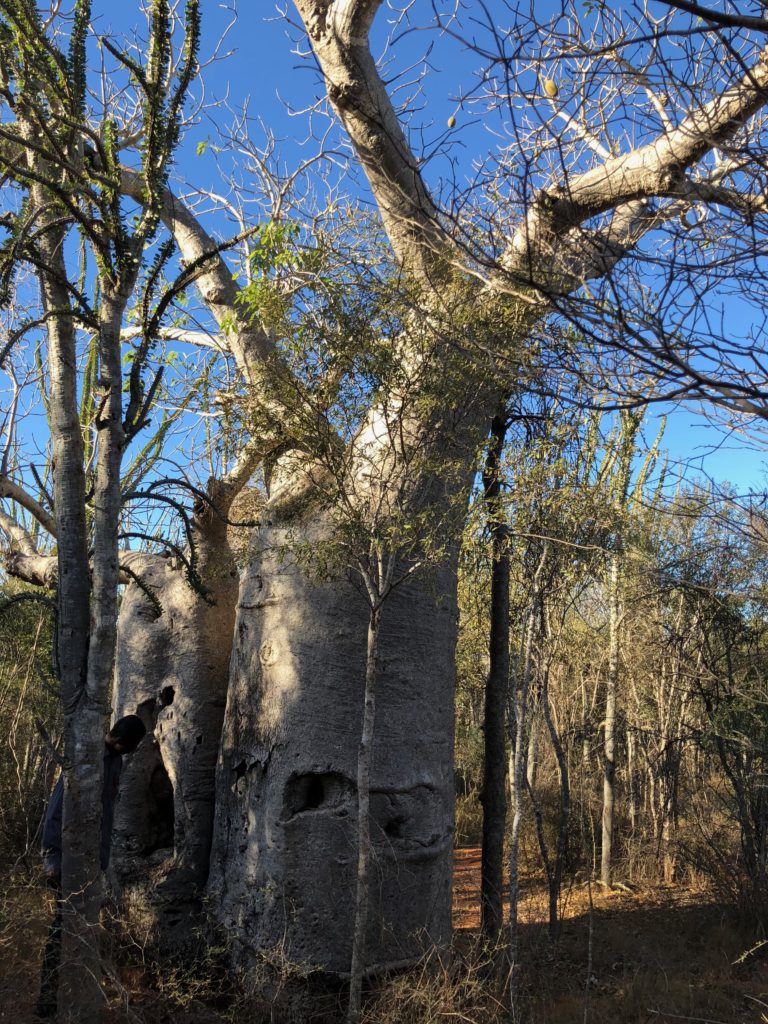 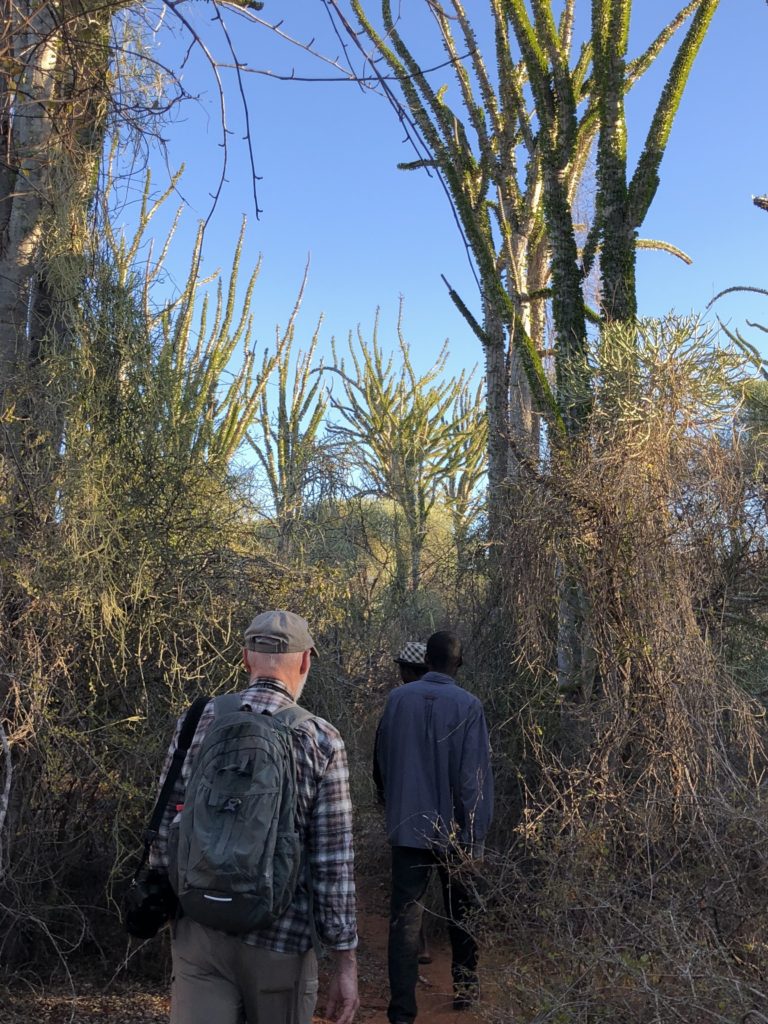 Also at Berenty was an equally unique gallery forest – a forest associated with a river or wetlands – this one along the Mandrare River.  A much more “classical” forest as it was populated by recognizable (to us!) trees and actually formed a closed canopy. 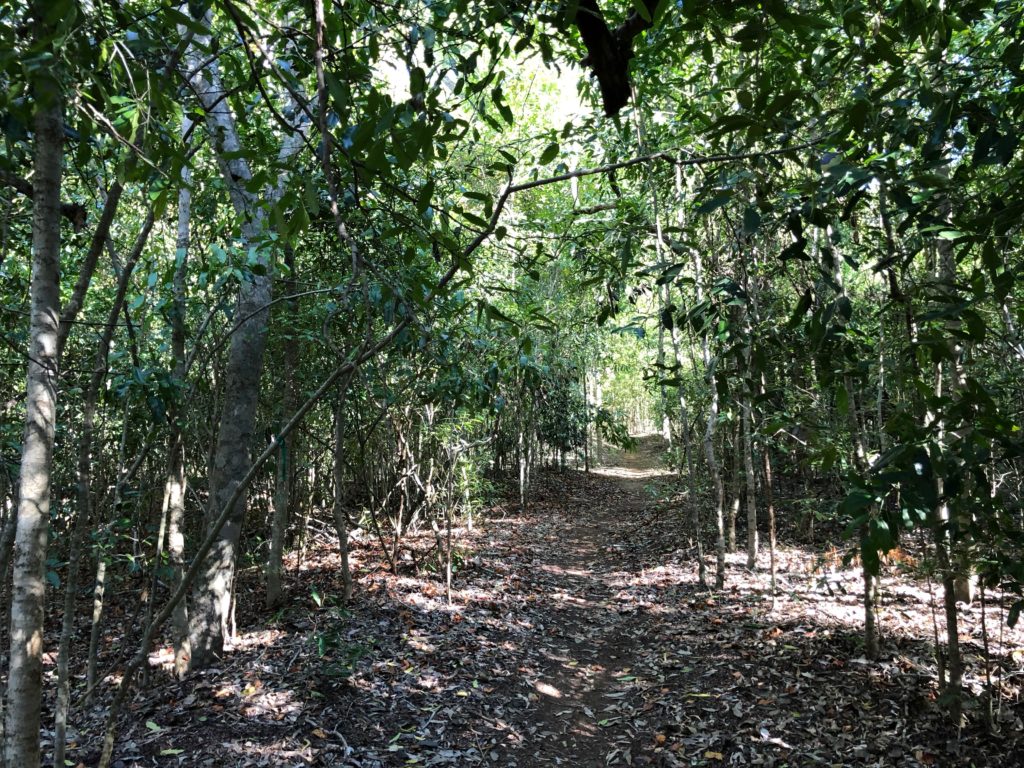 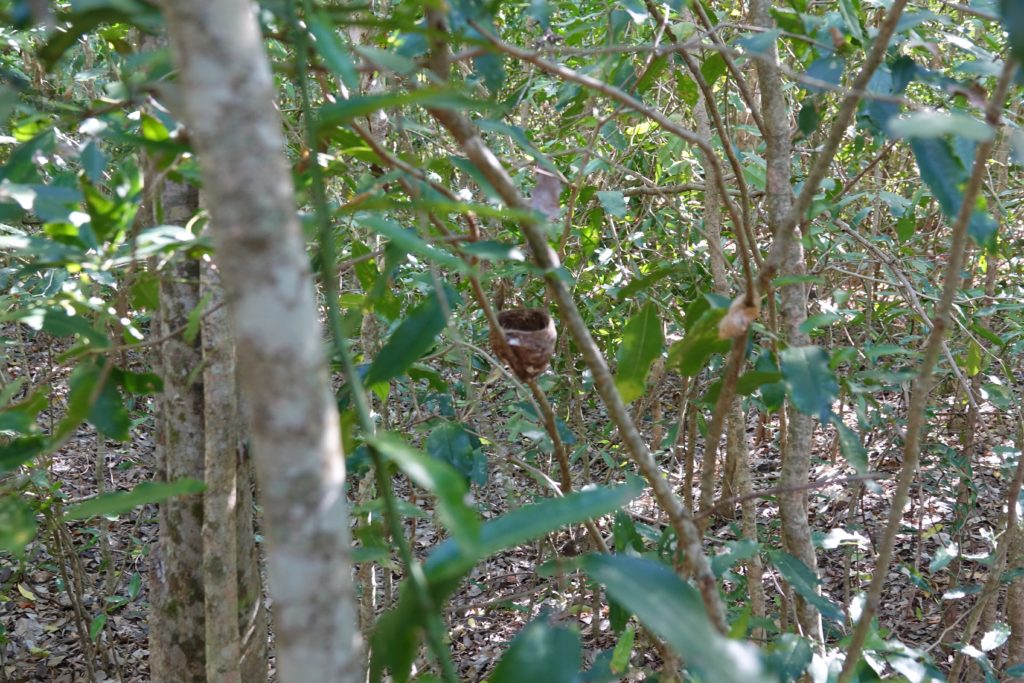 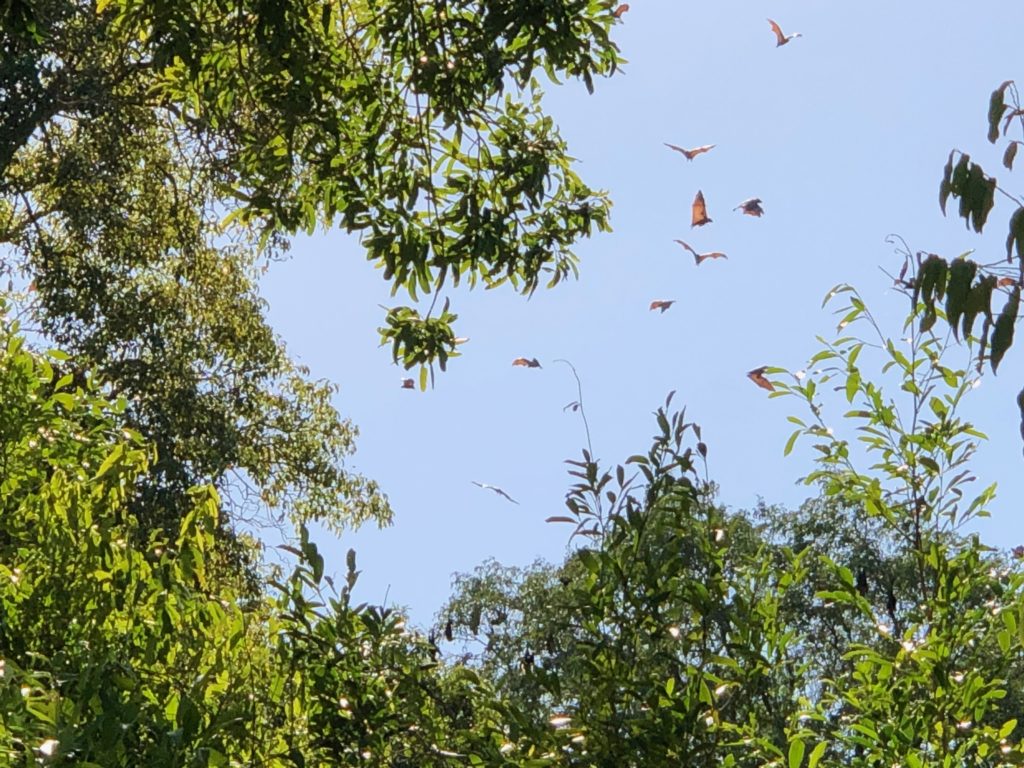 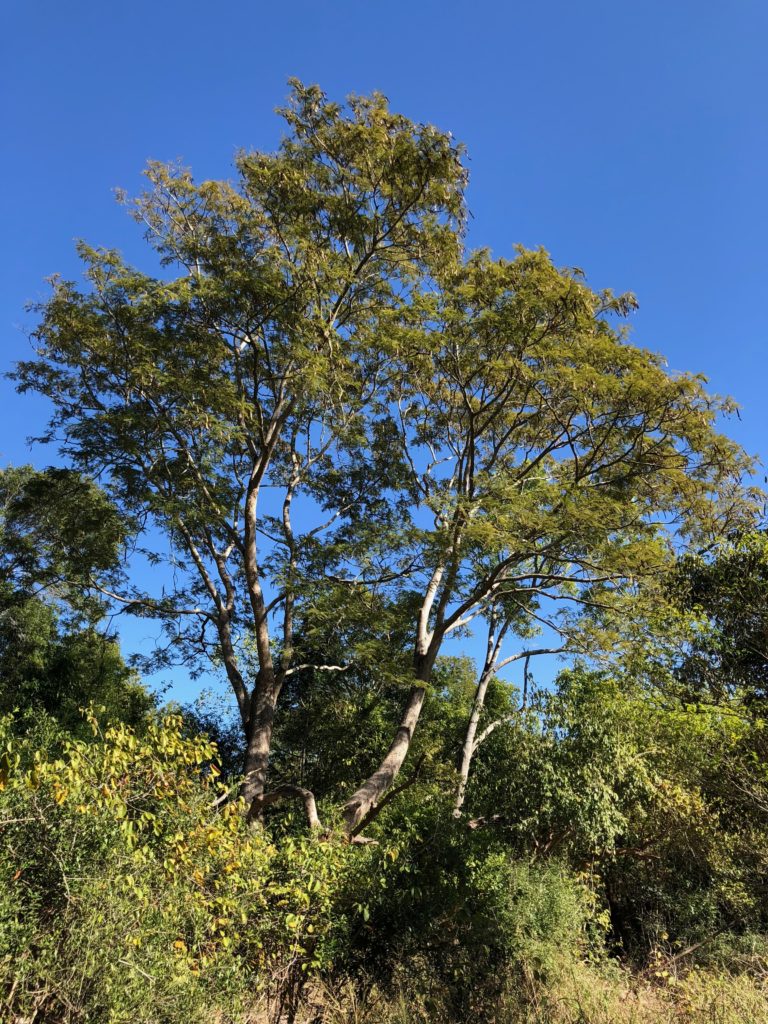 Unfortunately, the most lasting impression I have of the spiny forest is the extreme peril to its continued survival it is currently facing.  Only a maximum 3% of the remaining spiny forests are protected.  The pressures they are facing are massive, unrelenting, and growing.  Slash and burn agriculture, followed by conversion to grazing land is huge.  Firewood collection and charcoal production are constant and everywhere.  The wood is also used for building materials.  The most egregious example seen was the sisal plantation (an introduced Mexican agave from which rope and twine are made and exported to Europe) abutting the edge of Berenty Reserve.  Step across the road and you are in the plantation.  Sometime in the last 5 years or so, 20,000 hectares (50,000 acres) of spiny forest was converted to this introduced monoculture.  A sad and very visible indictment on how underappreciated much of the natural world remains, even well into the 21st century.

One head-scratcher of an anecdote we came across while driving through one of the forests had to do with reforestation efforts.  Having heard and read about the extensive forest destruction on Madagascar for many years, I was pleasantly surprised to learn about these efforts.  Apparently, some of these efforts even dated back to the 1920’s!  I’m thinking I might need to readjust my pessimistic views of forest management on Madagascar – something I would be very happy to do.  But then I learned that those older reforestation efforts often consisted of the planting of non-native, fast-growing, and for some reason, favored trees…such as eucalyptus and pine!  I guess it can be argued that these plantings checked some of the erosion or destruction of forest soils, provided some small measure of forest services, and some degree of habitat for the resident fauna (we were told some lemurs had learned to eat eucalyptus leaves); but what price success? 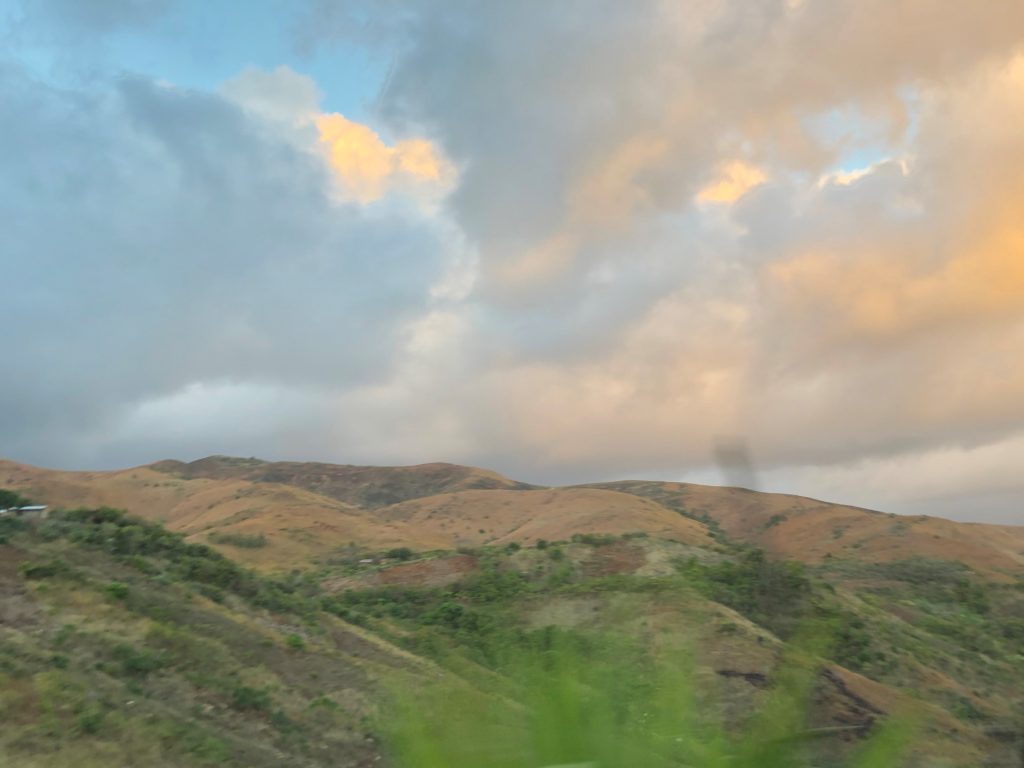 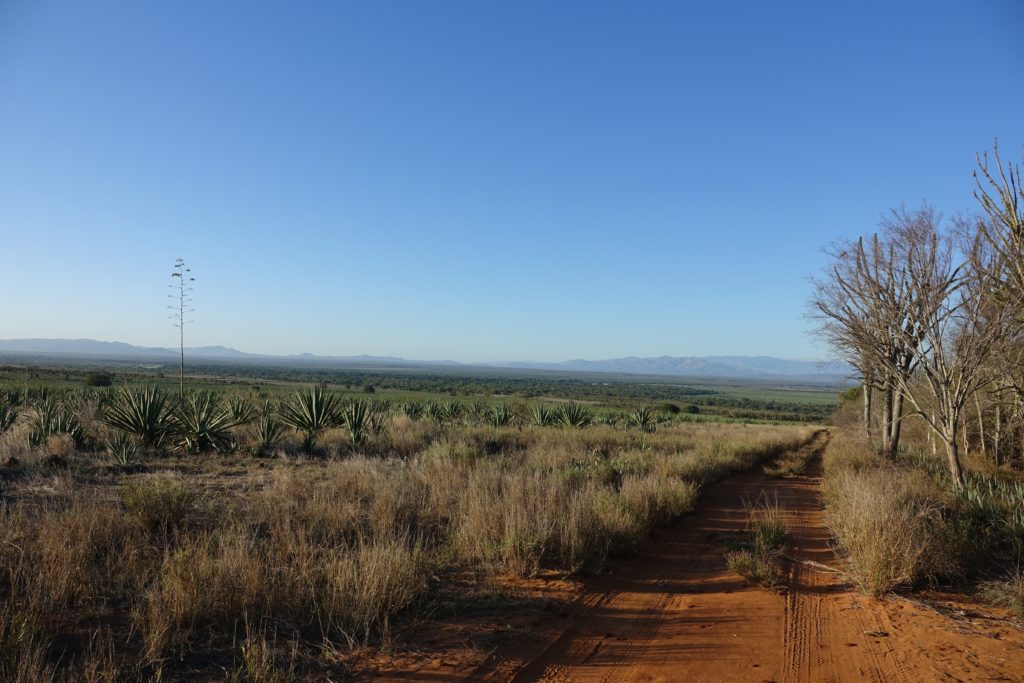 On Nosy Mangabe in the northeast off the town of Maroantsetra, and in Andasibe-Mantadia National Park in the central coastal lowlands, we explored examples of the humid lowland (rain) forests.  After the spiny forest, the humid lowlands have the highest percentage of endemic flora:  82%.  Apart from the (almost) totally different species make-up of these forests, they are very reflective of the classical description of rainforests.  That is, the several (four) levels, lots of vines, poor soil (most of the biomass is in the vegetation), lots of plants that grow up in the canopy on other plants, humid, and wet! 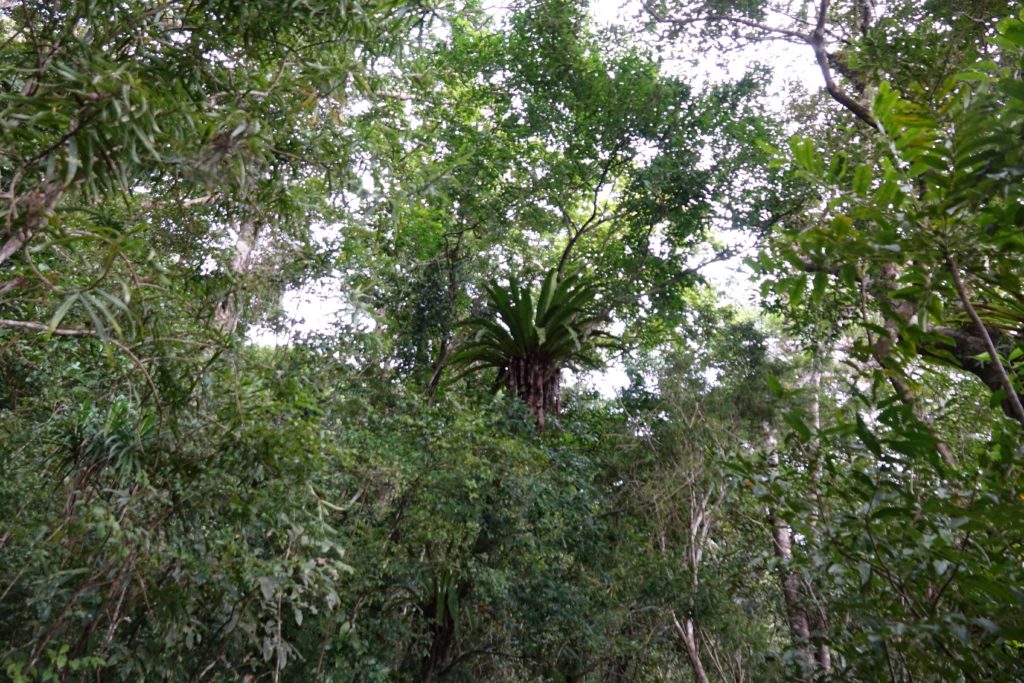 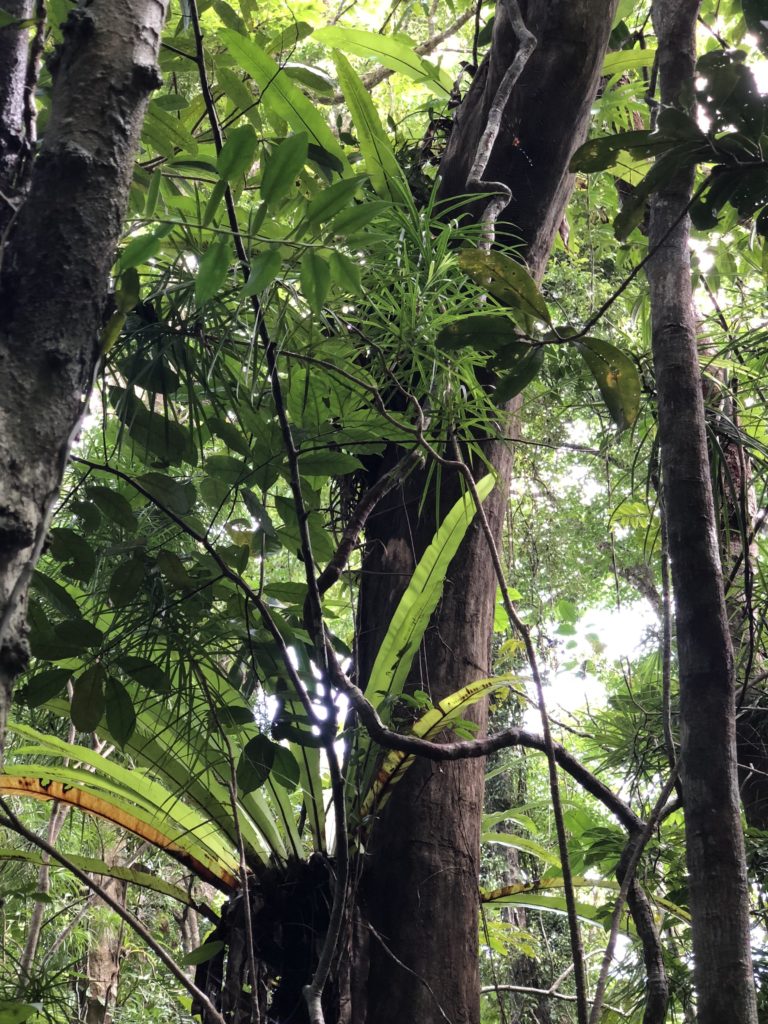 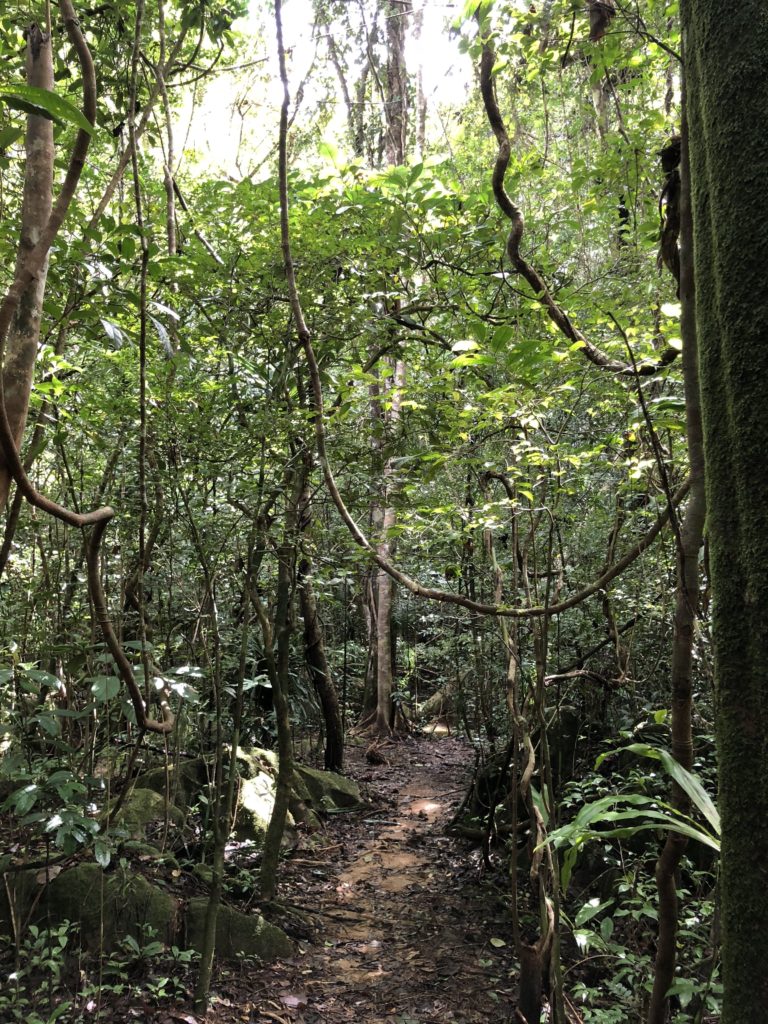 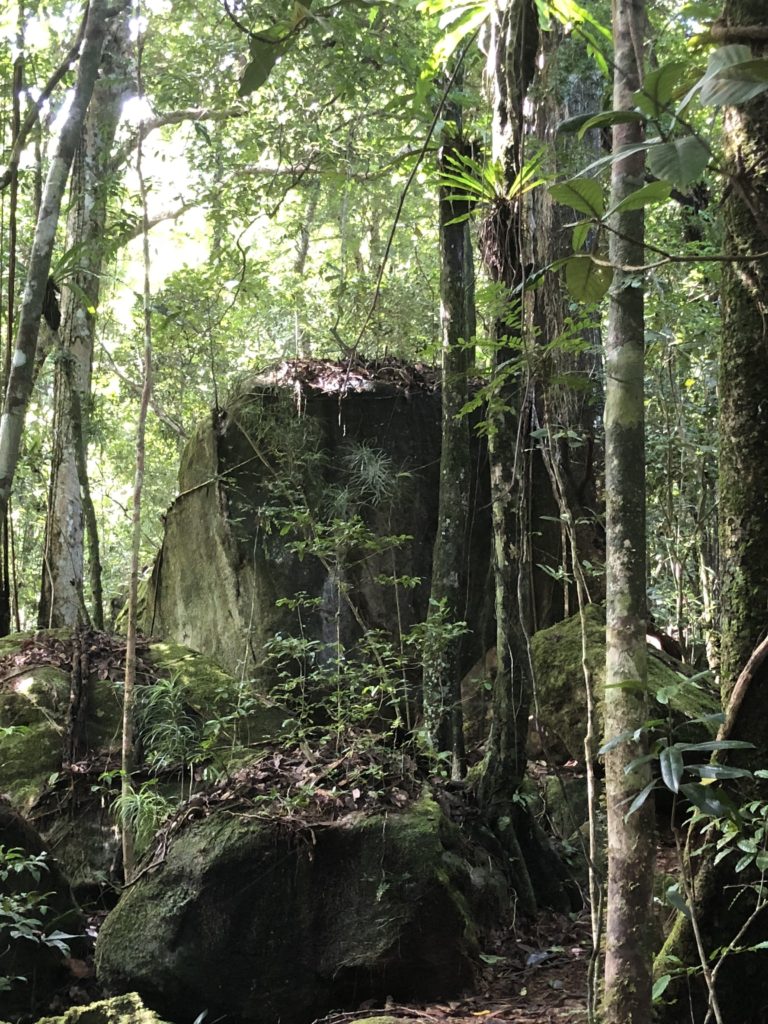 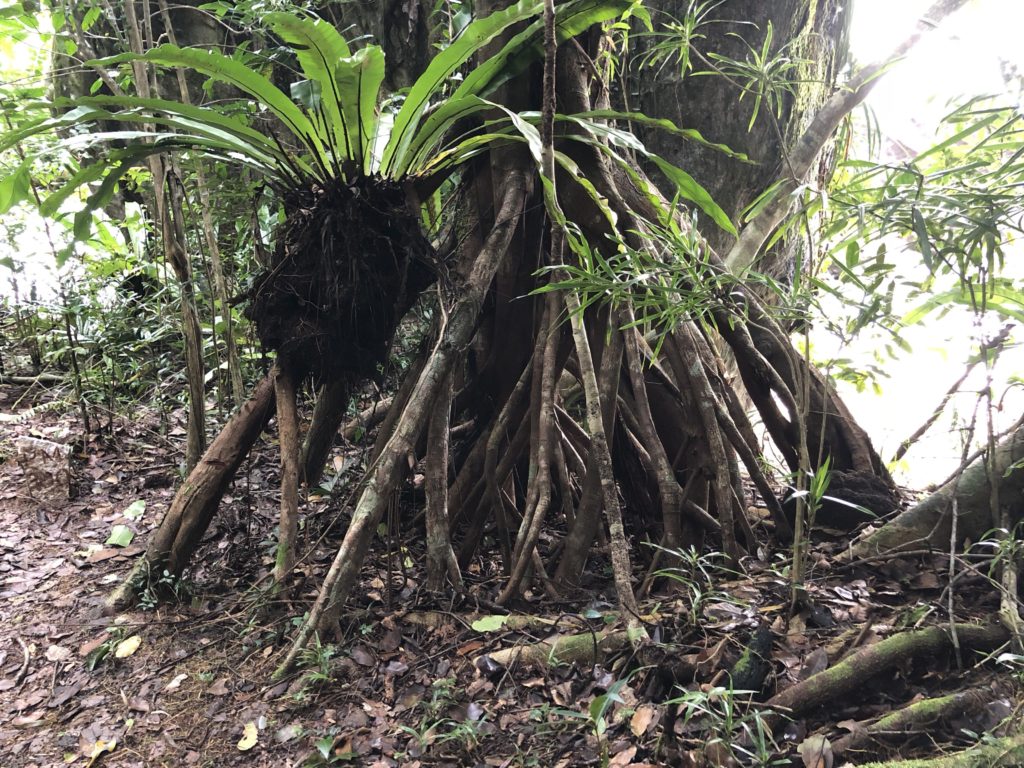 One of the trade-offs we made because we traveled in July (during the Madagascar winter) was that the weather in the rainforests was quite manageable if not enjoyable.  Not too hot, survivable humidity, and Seattle-esque rain!  But, it also meant that many of the usually encountered animals were not present.  Few birds, no colorful chameleons, no tenrecs (a big disappointment!), and no mosquitoes (okay, not a disappointment!).  But anytime you have the opportunity to visit a rainforest anywhere in the world, you should take it.  They are unique, exciting, and humbling expressions of what this planet has to offer.  And, unfortunately, it has to be said that they may not be around that much longer. 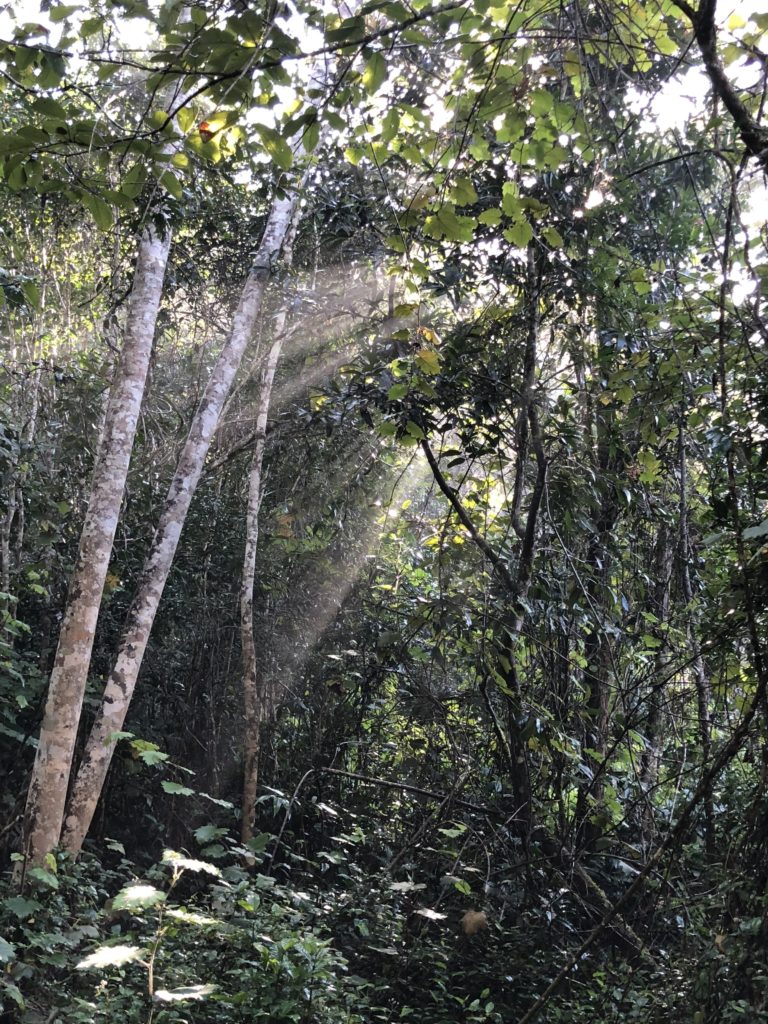 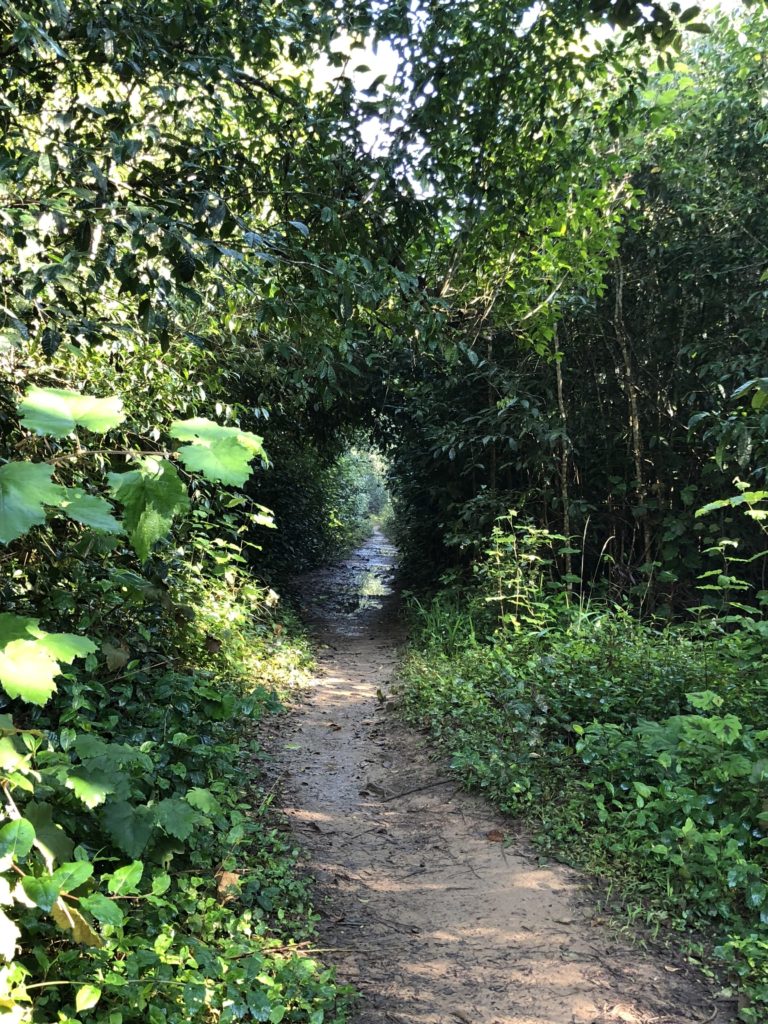 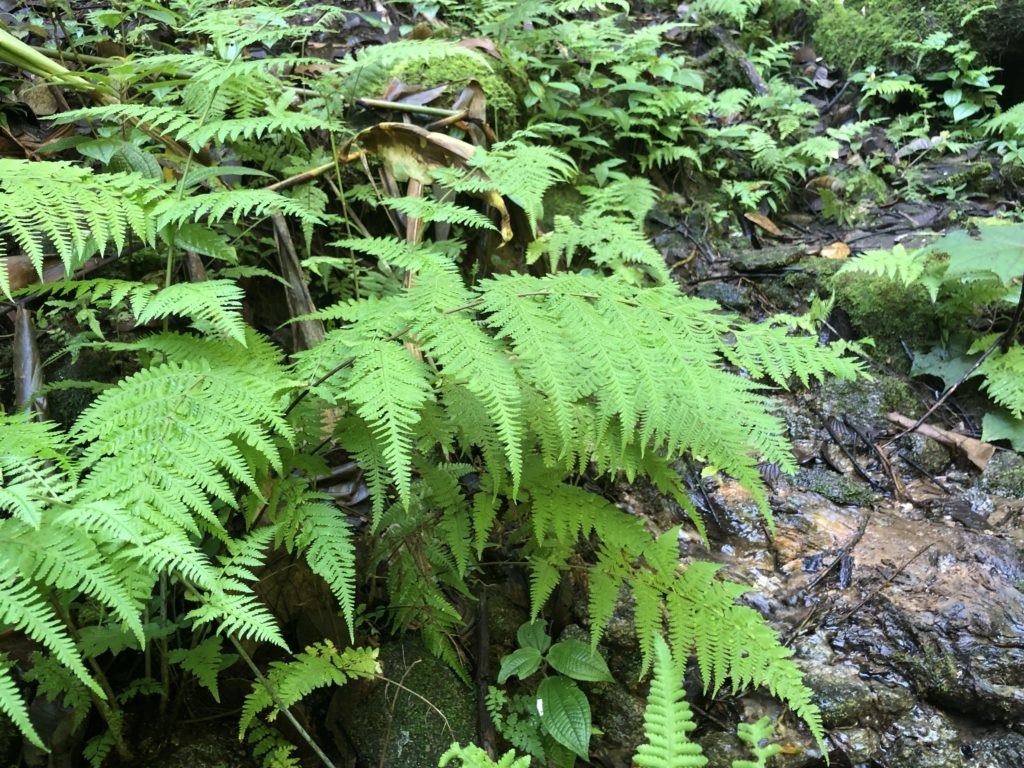 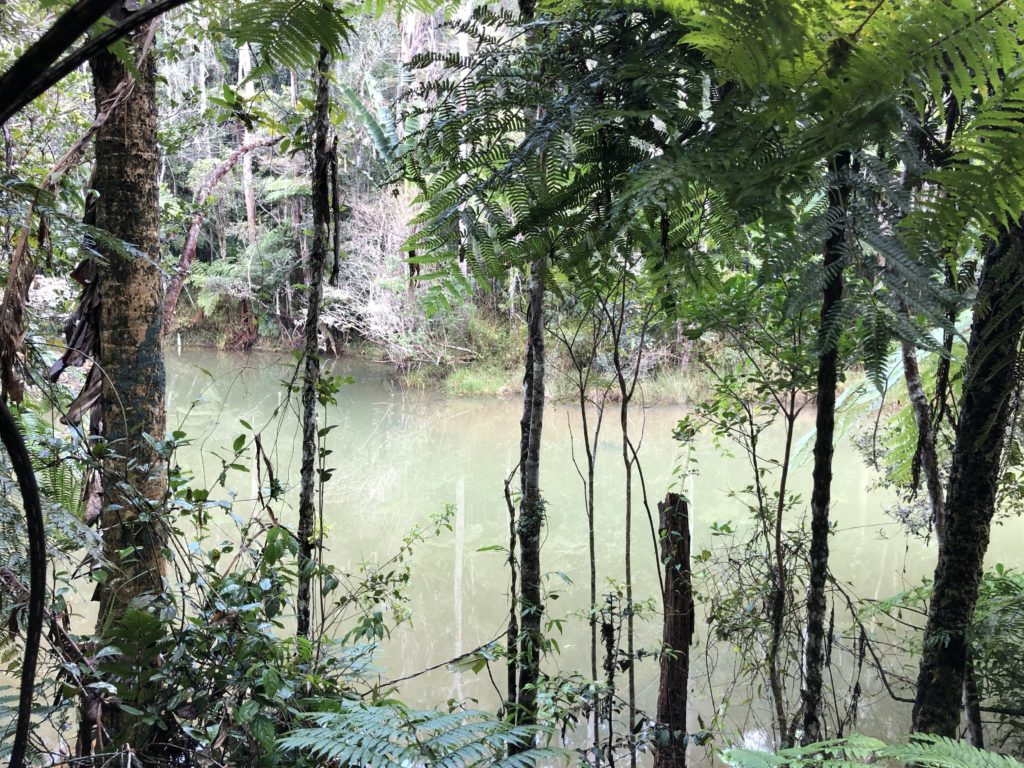 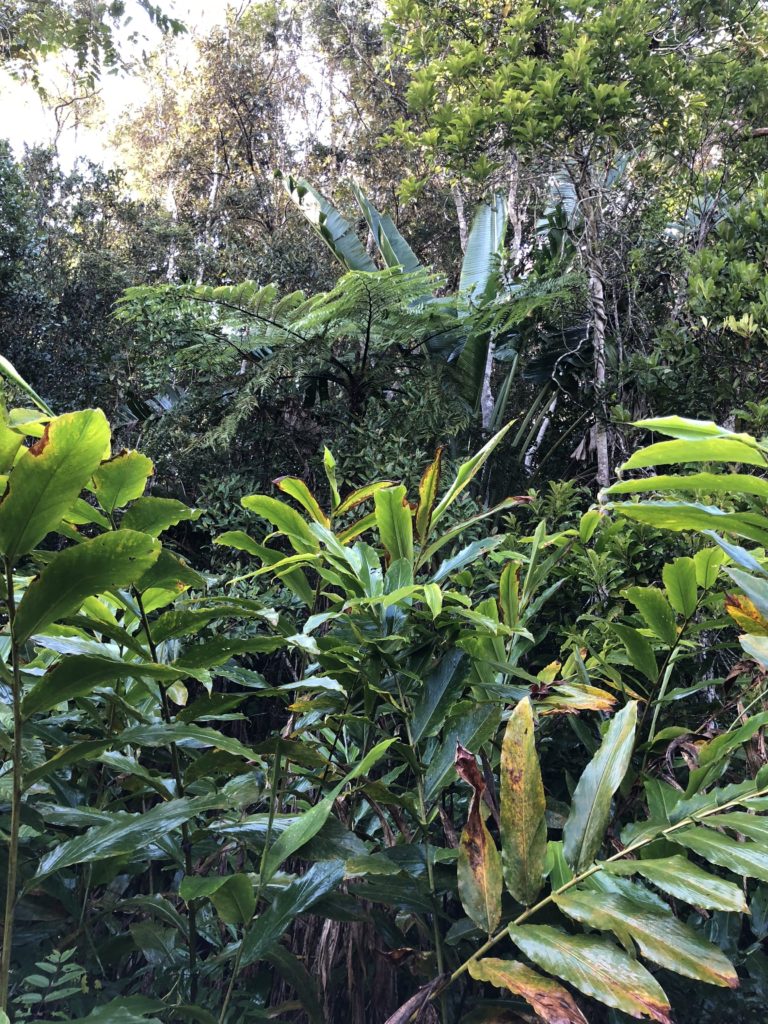 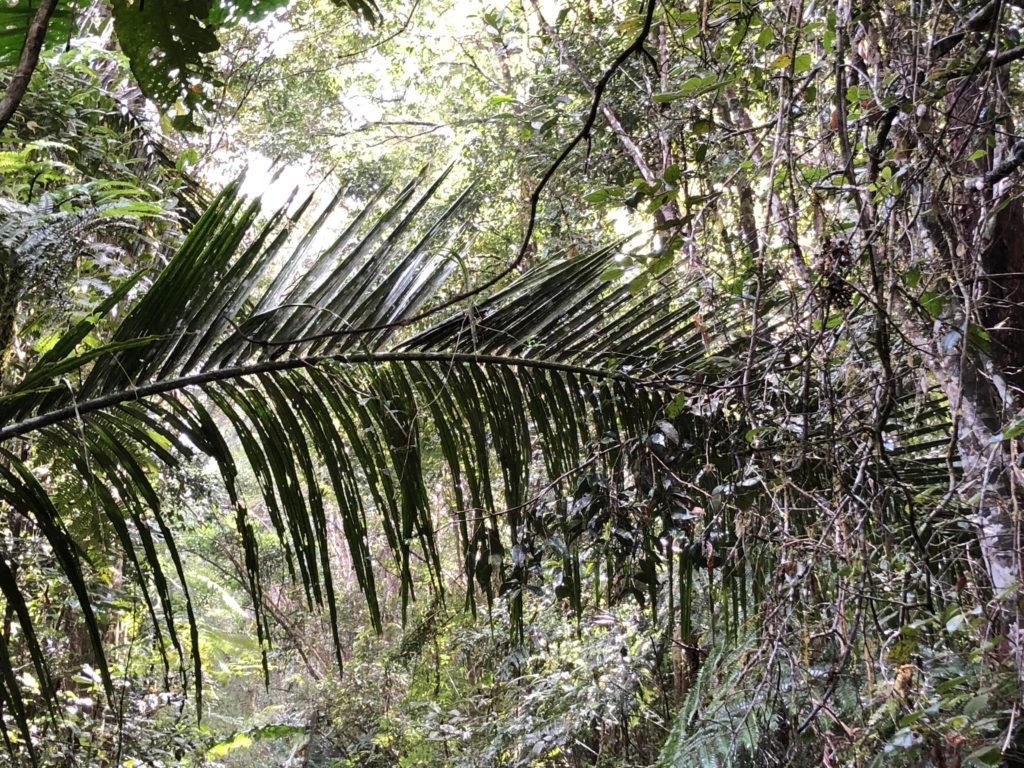